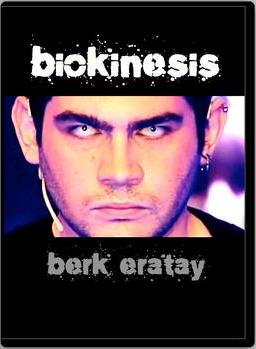 The most astonishing thing you'll see in magic this year.

It's time of open your mind to the power of Biokinesis...

Biokinesis is the ability to use kinetic energy to rearrange or control the genes in your own body. So if you mastered Biokinesis would it be possible to genetically reprogram yourself? The answer, in theory, is yes!

This is one of the most astonishing things you will ever see: Imagine that you are performing your favorite effect and at the key moment you ask your spectator to stare into your eyes. Your eyes close as if you are falling in to a trance and when you open them again they have turned completely white! That's right - your eyes have totally changed color!!

Believe me this will freak out even the most cynical of spectators. And then whenever you choose, you can close your eyes, come out of the trance and your eyes are totally back to normal! You really have to see this in action to understand how amazing this actually looks. It's like a special effect done live! And unbelievably, it can be instantly repeated.

Berk Eratay's original version of Biokinesis helped him win the title of Uri Geller's Phenomenon in the Turkish version of the TV show. He spent over 8 years developing and refining this incredible effect and with the help of a top eye surgeon Berk has created the perfect custom made gimmicks to apparently achieve the impossible.

Berk's highly-original Biokinesis effect with allow you to change the colour of your eyes at will and more importantly instantly change them back to normal.

On the DVD Berk covers every aspect of his method, which includes:
The correct set up.
The proper care of the gimmicks.
Full handling details, including the tips and tricks he has mastered over 8 years and thousands of performances!
Full instructions on activating and deactivating the gimmicks during any performance.
This really is one of the most original & astounding things you will ever see. It was the talk of MindVention 2008 and this is the first time Berk has ever revealed the full secrets behind this miracle.

Full Instructional DVD is included. Engineered custom gimmicks are not included in this package because of US laws prohibiting us to sell contact lenses. You will receive instructions on where to buy the custom gimmicks.

Disclaimer: BIOKINESIS IS INTENTED FOR ADULT USE ONLY. IN PURCHASING BIOKINESIS THE PURCHASER ASSUMES AND ACCEPTS ALL RISKS RELATED TO ITS USE AND PENGUIN MAGIC ACCEPTS NO LIABILTY FOR ANY MIS-HANDLING OR MIS-USE. FOR ENTERTAINMENT PURPOSES ONLY.