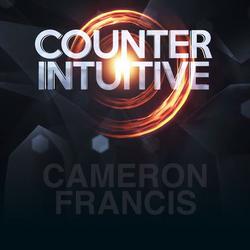 This trick is RIDICULOUS from start to finish. Ridiculously fooling, gets more ridiculous with every phase, and is ridiculously easy to learn.

This trick fools everyone.
Whatever you think the secret is, it's better than that.

First, you have your spectator MERELY THINK of a number, then SECRETLY deal that number of cards.

Second, you have her FREELY choose ANY ONE of those cards and LOSE IT IN THE DECK, and then! Just so you have no clue, you have her shuffle and lose the packet in the pack as well.

CLIMAX #1
As hopelessly fair as that sounds, you're able to READ HER MIND and divine the identity of the card!

CLIMAX #2
With a sweet spin move, a packet of cards flies out of the pack... a packet which HAPPENS to contain EXACTLY the number they had originally thought of.

CLIMAX #3
When they're done counting the cards of the packet, they turn over the top card, AND IT'S THEIR EXACT CARD.

If you need a big finale for your card set, look no further. Counter Intuitive fools everybody, and DOES NOT require complicated sleight-of-hand OR crazy stacked deck work. YOU WILL LOVE the brilliant secret.