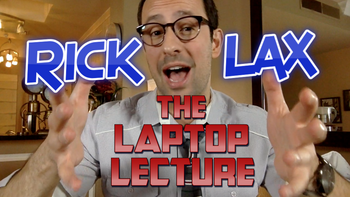 20 mind-expanding tricks from one of magic's most creative inventors!

Here’s a message from Rick:

“I promise you this: If you buy the laptop lecture, you’re going to walk away with at least one new trick that you’ll actually perform. I packed the Laptop Lecture with tricks for all skill levels: Beginner, Intermediate, and Advanced. But even if you’re an advanced magician, I’m betting you’re going to like some of my easier tricks, because performing them will allow you to focus on your audience.”

For years, Rick has been showcasing mind-boggling magic on his personal YouTube channel. And he’s only shared the secrets with his closest magic friends. But now, after years of carefully guarding these creations, he’s ready to not only reveal their secrets, but teach them, so that you might perform them, too.

After the tricks and explanations are done…the lecture doesn’t stop! You’ll get to watch two live performances by Rick, and you’ll hear postgame analysis on what went right and what went wrong. You’ll also get a look at some of the magic creations that inspires Rick.

But at the end of the day, the Laptop Lecture isn’t about inspiration. It’s not about theory and it’s not about analysis. It’s about learning new magic tricks. And Rick’s got 20 of them ready to go:

1: Shrink & Clone: Turn your microwave into a shirk ray and a cloning machine.

2: Knifed Necktie: The cut-and-restored necktie illusion that served as a precursor to Rick’s hit illusion, “Detach.”

4: Starter Box: An empty matchbox instantly fills up with matches.

5: Red Sea Chi: A dinner plate, a cup of water, and a peppershaker are combined to create a powerful chi demonstration.

6: Wormholope: A dollar bill teleports from one envelope to another.

7: Coin-Through-Shirt: Pull a signed coin through the fibers of your t-shirt.

8: The ‘Which Hand’ Criss-Cross: A dumb joke becomes an amazing illusion before the spectator knows what hit her.

9: The Chip Vanish: Rick’s variation on the false transfer.

10: The Grab Appearance: A poker chip appears inside an empty hand.

12: The Fingertip Wipe Appearance: A poker chip appears at the fingertips.

13: Floater: A simple way to float a playing card with no invisible thread.

14: Oral Fixation: Bite the center out of a playing card and magically spit it back together. Don’t blink!

15: Eating George: At the bars and the clubs, Rick performs this trick more than any other.

18: Fortuity: A chosen card appears at a chosen number. Use a borrowed, shuffled deck.

20: The Lax Cut: Rick hasn’t just guarded the secret to this Cutting-The-Aces sequence; he’s performed it for virtually no one. Only his closest, most-trusted magic friends and advisors. But now, he’s ready to share it with you. If you do card tricks, this secret alone is easily worth the price of the lecture.